You’re not sick – in fact you’ never felt better.  Twenty feet up in your tree stand, last week of October and the whitetail rut is starting to kick into high gear.  The crunch of leaves gave him away before I ever saw him.  A quick grunt and the crunching comes toward the stand.  I can see it’s a nice sized deer and he’s coming to a shooting lane-he’s doing exactly what he’s supposed to do.  His rack looks big to me.  Six points for sure, but he’s heavy, and he’s at 18 yards, standing broadside. 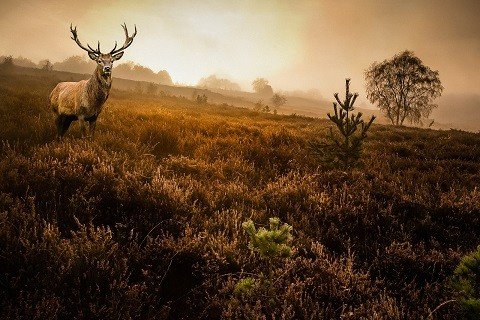 I hadn’t noticed, but my grip on the bow was tight – when I came to full draw I barely got it back and now that I was trying to settle behind his shoulder I was having a hard time.

Buck fever had a hold on me, and as this was one of my first encounters with it, I had no idea how to cope.  Well, I’m sorry to say that I let an arrow fly and it hit him high and back too far.  He took off and even though I looked for 2 days I never did find him.

What I wish I’d known is that I could have probably let that bow down, maybe I didn’t even have to draw as soon as I did.  I could have gotten myself under control before trying to put the sight on that deer.  With experience, and mostly through encounters with deer you have no intention of shooting you’ll find that in most cases you have time on your side.  Oh, and you don’t have to shoot at the deer – in fact, if you think you might screw it up, don’t shoot.  Watch him, and he’ll walk away and you can try again the next time he comes through – and he will.

When you see a deer, get yourself in order.  Take deep breaths, get your feet set, look over your equipment instead of the deer.  Play through in your mind what’s going to happen from draw through aiming and release.  I now recite the phrase, “Pick a spot and follow through” to help with poor shooting habits that sneak up on me when a shooter comes nearby.

Try passing on some deer and counting how many minutes they stick around and how many shot opportunities they actually give you.  The realization that you have time to take the best shot you can will be a big help when the time actually comes to harvest a deer.

Crossbow Hunting 101 - Essential Dos and Don'ts
Why You Should Avoid Long-Range Crossbow Shots
9 essential pieces of clothing every hunter should have
How to Determine Your Effective Crossbow Range
Mechanical Advantage Formula - Using it for a broadhead results in better arrow penetration
Whitetail vs Crossbow - Deer Bow Hunting Tips
Pick A Bow © 2015-2020 Pick A Bow (pickabow.com) is a participant in the Amazon Services LLC Associates Program, an affiliate advertising program designed to provide a means for sites to earn advertising fees by advertising and linking to amazon.com. As an Amazon Associate we earn from qualifying purchases.