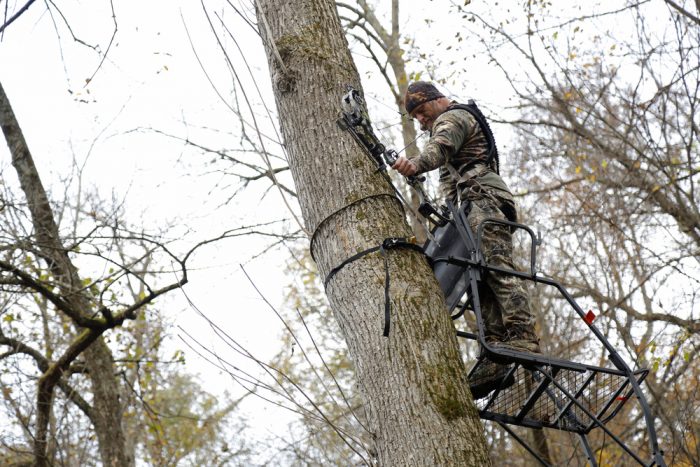 When it comes to hunting, quick decisions are highly important. The high moments of these adventures can be stressful enough as they are, but they become even more important and stressful when you add that punch of adrenaline you feel. This is why especially beginners have a bigger problem when it comes to shot placement.

Making the right decision is really important, especially when you find yourself being full draw over a doe. You must know the shots that can be done in various instances and make sure you are following through with the right one, so you won’t miss your chance at the trophy. After all, it’s only a matter of seconds.

As a bowhunter, the goal is to make a kill that’s both fast and clean, when you make your shot. The best way to do that is to send a broadhead through the chest cavity. In the following lines, you’ll find the shot challenges that you should come to expect as a hunter, especially if you shoot from a tree stand (check out our tree stand buying guide).

The straight-on shot is one that you should actually try to avoid. You’ll have a very poor prospect of penetration, which translates into having a very low chance of actually hitting the deer. The chance of hitting something from this angle is low even if you were to hunt something bigger, such as an elk, so it’s better if you don’t even bother with this option.

Don’t despair, though! Naturally, the deer will start moving at some point and you will get better options at shooting it then. This is why patience is so important in the game of hunting. Just wait until the deer will turn to the side. If the animal moves toward you, you’ll get another hard angle, the straight down, which you should also avoid and wait.

Since we’ve mentioned this shot, let’s talk about it. This one is a really tempting one. After all, the deer is right in front of you and you are basically on top of it. The desire to let the arrow go can be quite strong! It does look like a great shot, but in fact, it’s another one that it’s simply better if you just wait.

This angle, more than any other option out there, is probably going to lead to a hit that’s fatal, but you won’t be able to recover the deer. This shot usually means a single-lung hit, which may affect that organ, but the deer won’t die until after a couple of hours later. You’ll have to track it all this time using a low blood trail, which is not very exciting.

So, you may be asking, why not try a straight-down spine shot? Well, this is not recommended either because the deer has a spine with a width of just 2 inches. This means there is a big chance you’ll miss the spine and hit some muscles or bones in the best-case scenario, but even that won’t kill the deer.

Like we mentioned above, the best thing you can do is to be patient. As you wait, the doe will, at some point, depart from the stand. If during all this time it remains calm, you’ll have a great chance at hitting it soon, before you lose it from your range.

But what happens if it looks like you can’t do much waiting? What if the deer looks like it’s a bit scared and getting ready to sprint at any moment now? Don’t worry, there is a shot that can save you – simply try to aim for the diaphragm and liver. But this is only if you consider that, by now, you have enough experience.

Since the liver is one of the vital organs, a broadhead going through it will lead to a humane killing of the deer. For this, though, you’ll need to know the anatomy of the deer very well, something that only comes after a long experience in the game. This shot is only for people who have done their research and know exactly what they are doing.

Regarding the aiming point, if you do decide to do something about it, try not to aim too far forward. If you do this, you’ll have to deal with the single lung hit, which we already explained, is something to be avoided. Eye a spot somewhere at the middle distance between the front leg and the rear ham. Aim to the side of the yellow dot and you may have yourself a kill.

As mentioned, patience is everything in hunting, and when it comes to this shot, this couldn’t be more true. A quartering deer will fast become a broadside one as it goes along the stand. In the case that you can’t wait, you can try and have a shot in this situation, but you must know that it basically has to pass a rather restrictive test so it can be considered ethical.

For this shot, you will need to figure out whether the angle is maybe too sharp, which means that if you lack experience, you shouldn’t even try to follow this shot. This is considered to be an ethical shot only if the angle is slight and you have the possibility of being completely accurate.

Take your skills into consideration. As a result of how this angle is positioned, the margin error is close to nonexisting. But, if you are not sure that you can really hit it by less than an inch of the initial target, don’t shoot. Almost all bowhunters ought to pass this one if the distance goes past 15 yards.

If we are to talk about the aiming point, you should hit as close as you can the nearside front leg. Aiming above the elbow joint and shooting when the doe takes a step, as this will expose the vital organs, is going to increase your chance. In case you don’t think there’s a good chance you’ll hit the liver and lungs, again, just don’t take the shot.

Now we’ve finally reached one that you can do, as it is considered a pretty ethical shot. You still have to make some adjustments taking into consideration the height of the treestand, but you can have a go at it. These adjustments are necessary because, as you can imagine, there is a difference between a live deer and the target practice.

Explaining every angle for every stand height is pretty complicated, but there is something you can do about it when it comes to aiming. Picture the path the arrow is going to follow as it goes through the deer. Aim toward a point that is going to make the arrow pass through the center of the body, visualizing the exit point as well.

This shot is also one that you can do and you should do it as soon as you can. You will have the tendency to aim too far forward. The best exit hole you can hope for is the offside front leg so you have an aiming point that will lead to this. Aim having the exit hole in mind and the entry point will compensate by itself for the body angle.

Protecting your bow with a case is really important
Why You Should Avoid Long-Range Crossbow Shots
Crossbow Hunting 101 - Essential Dos and Don'ts
How to sight-in your bow
Tracking Wounded Deer - When is the right time?
My first experience with buck fever
Pick A Bow © 2015-2020 Pick A Bow (pickabow.com) is a participant in the Amazon Services LLC Associates Program, an affiliate advertising program designed to provide a means for sites to earn advertising fees by advertising and linking to amazon.com. As an Amazon Associate we earn from qualifying purchases.