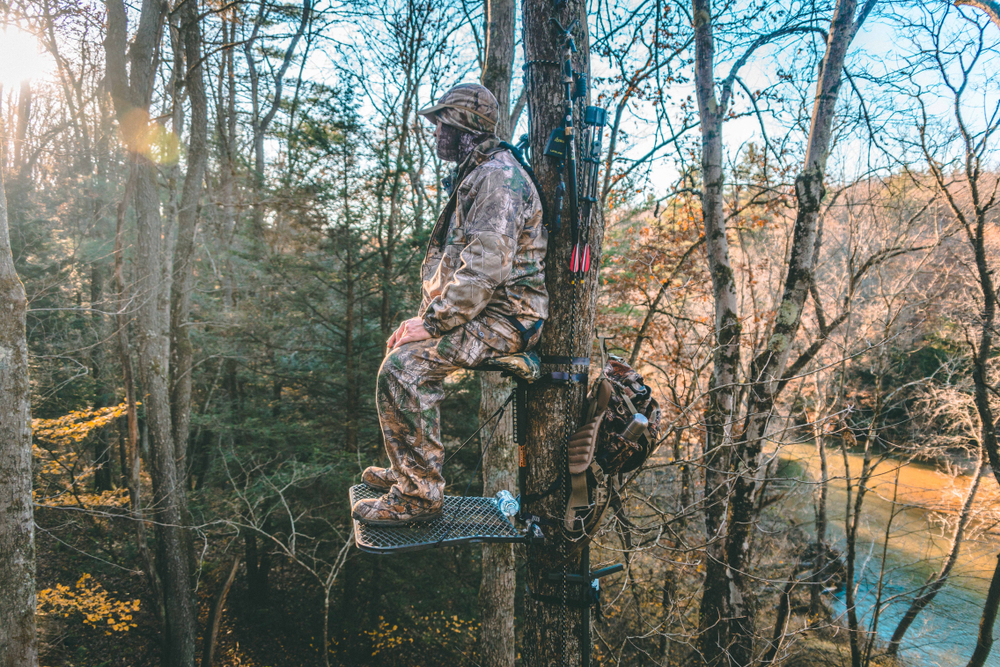 Given how much effort, time, and even tools that you need in order to steal a hunting tree stand, it’s quite surprising that some people even bother at all. Among the tools and other things that people use to do that we can name at least a chainsaw, bolt cutters, and probably an ATV, so do people even bother?

The problem is all too familiar for many: after you’ve spent so much time finding a good stand and a good spot, after you put up the treestand, some person comes along and gets away with it! We’ve looked into some options that you could take into consideration when it comes to preventing treestand theft.

As soon as you get home with your brand new stand, make a special mark somewhere on it, where you would be able to see it later on, but maybe not in the most obvious place, so the thief won’t try to hide it. This way, the agency or the police that will take on the case can be sure that what they’ve found is surely yours.

Make sure it’s in an area of the stand where the thief is less likely to look. You can just scratch your initials on the underside of one of the armrests, for example, or at the back of the seat cushion, by using a sharpie. Just be sure that what you write down is something that will be only yours, such as your name or your birth year.

Place it deeper in the woods

The placement of the stand can also play a role in tempting the thief more or less. If it’s in a place where everybody can see it, the chances of it being stolen are much higher, but if you place it in the woods, somewhere deeper, those chances start to drop. This is because many people who steal such things, just consider this an opportunity, it’s not a preconceived crime.

This means that the more remote the stand is, the better for you and for the stand. You can also take other preventive measures in order for these things not to happen, such as chaining the stand to a tree or using a padlock to lock it. Since many people just happen to pass by, without the intention of stealing, they won’t be prepared with bolt cutters to cut it.

It’s still important to keep in mind that some people just really like the idea of stealing such things, playing a role for them that is similar to having a trophy; they don’t shoot deer, they steal treestands. This means they may return to the area with some cutters, so taking more than one measure to stop this is recommended.

You may use this to guard your properties, such as your home and car, so why not? It’s a pretty common thing to place a camera near the stand site exactly for this reason. Position the camera in a way that is going to be hidden from the naked eye and make sure it aims directly at your stand.

Of course, you may think that if they steal the treestand, why won’t they steal your trail camera as well? This means that you have to take some measures for this, as well. Put cables and padlocks all over it. Use your special camouflage techniques to cover the camera using twigs, leaves, and other things you can find in that area.

Putting the camera high up in a tree, close to your stand, is also a very good option. Even in this case, you should lock it to the tree. This is a great idea especially if you are on public lands which don’t really have regulations to stop other people from “hunting” the stands of others if they aren’t back in a certain amount of time.

Even in this case, where there isn’t that much you can do about such a thing, because of the rules of public land, you’ll be able to see who took your stand and confront them later, if you run into them, as you are bound to. Not to mention, if there is a camera hanging several feet above, this may discourage many from even trying to do anything about it.

How to report the theft

Now, let’s take into consideration something that may still happen. With all of the measures that you’ve taken, someone still managed to get to your treestand and steal it. What do you do then? Reporting the missing stand to the police and the game warden is what you need to do.

You must tell them the location where the stand was, what the approximate value of it is, and offer any other piece of information that you may have, even if that piece of information is just a suspicion you have regarding someone. If you notice footprints, don’t go near them and inform the police that you have some clues about the thief.

You may not know this, but quite often, law-enforcement agencies will get a report from the pawnshops or resellers in their area, so your treestand may be on that list. These agencies keep a close look at those lists. On top of that, you can also try going to the local pawn shops yourself – who knows, you may just get a surprise.

In the case that you notice a pawnshop having your treestand, don’t confront the owner directly – in some cases, they may have gotten it from somebody so they don’t even know it was stolen in the first place, which makes them less likely to believe you. Contact the agency that is working the case and tell them of your discovery.

The same thing can be applied if you notice someone that may use a stand you suspect is yours. Don’t try to confront them, try to rely on the help of the agency first. Using the proper channels is always recommended as you don’t know how the other person may react. Things will go even smoother if you have left a mark on the treestand.

Game cameras will offer sufficient evidence so that the thief will get a sentence. Yes, there is the issue that, since they are themselves highly-priced items, people may eye them as well. This is why you must take all measures in order to hide the camera and secure it as well as you can to the tree.

A game camera security box that was screwed to the tree and for which you used some cables and padlocks to secure it should be in a pretty safe state at all times and offer the evidence that is needed for the proper prosecution. You can also try and use more than just one camera, as that is something the thief is less likely to suspect.

Try to think like a treestand thief. What is the route that is most likely that they’ll take in order to get to your stand and away with it? Place a camera that follows that route as well. Place a camera close to the gate or at some pull-off at an angle which increases the probability for the camera to get a shot of the license plate.

Shot placement- Is broadside the only ethical shot you should take?
The Sounds Deer Make - What Do They Mean?
Crossbow Hunting 101 - Essential Dos and Don'ts
Why You Should Avoid Long-Range Crossbow Shots
What Does the Archer's Paradox Mean for Your Bowhunting
What are the advantages of saddle vs classic tree stand hunting?
Pick A Bow © 2015-2020 Pick A Bow (pickabow.com) is a participant in the Amazon Services LLC Associates Program, an affiliate advertising program designed to provide a means for sites to earn advertising fees by advertising and linking to amazon.com. As an Amazon Associate we earn from qualifying purchases.