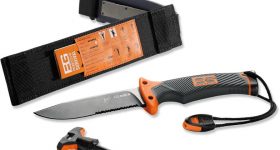 What are the best hunting knives? It’s a topic that seems to get rehashed each season, as manufacturers release new blades and consumers discover problems with them. As a longtime deer hunter, I know what I look for in a knife: a solid fixed blade that takes and holds an edge and won’t fall apart during the first tough job.

I was skeptical when I was handed the Bear Grylls Survival Series Ultimate Knife from Gerber. After all, the product is named after a TV star who is famous for doing dumb stunts that no self-respecting hunter would ever do. How good could the blade be?

So when I took the knife out of the package, I had low expectations. I won’t lie to you, I expected another gimmick. I was pleasantly surprised with my first impression of the blade: it is heavy and the grip fits nicely in your hand. The sheath is a classic durable nylon with hard plastic around the blade and a Velcro strap to hold the knife in. As expected, it will attach easily to a belt or backpack, and while the design is functional and tough, it ain’t going to win any style competitions.

The blade itself is 4 and 3/4 inches long, and is obviously designed to take a beating with a full tang and thick blade. Gerber, in keeping with their typical choice of metals in a mid-range knife such as this, used 7Cr17Mov stainless steel, which gives a good value and doesn’t break the bank. As usual with a modern knife, it comes nice and sharp out of the box. But unlike many modern knives, this one has a high carbon content, which makes the blade slightly softer, but allows you to sharpen it again and again, extending the life of the knife.

Serration begins about halfway towards the handle of the blade, which allow easy cutting of rope and cords, but may interfere with carving or slicing cleanly – again, a mark that this knife is an all-around survival tool and not a specialty blade designed for hunters.

The knife has a mild drop point and a straight blade, which is just about right for tasks around the campfire. It won’t be the best knife for skinning and gutting, but it will certainly do the job well in a pinch.

The rubber on the handle is quite sticky, and I didn’t feel a worry about slipping while I was testing the knife out by butchering a nice 6-point buck. Gerber advertises that the butt of the handle can be used as a striking surface. I didn’t have a chance to test this feature but that area has obviously been reinforced to withstand impacts.

Gerber also advertises that the knife can be easily attached to a shaft or branch to be used as a spear, due to the inclusion of several lashing points on the blade. Unfortunately, I did not have the opportunity to fulfill my childhood fantasies of wielding a 10-foot lance, but the feature could come in handy in a survival situation.

After the butchering, the blade was nicked a bit where I’d hit some bones, so I tried out the blade sharpener that folds out of the sheath. A few strokes tidied up the blade nicely – obviously not as sharp as a nice whetstone would give you, but certainly more than sufficient for maintaining a blade in the field.

This knife still has a few tricks up its sleeve. In the bottom of the sheath is a small waterproof slot for a ferrocerium fire starter in the traditional style of a rod that is scraped on the back of the knife. After arriving back at camp, I was able to successfully get a fire going using the hot sparks created by the rod– and a bundle of dry tinder gathered nearby.

The blade has a small lanyard as well, which would allow a particularly bull-necked individual to wear the knife around his neck, and which features a small emergency whistle integrated into the plastic end-piece. In the case that one wanders away from their hunting partners and their voice cannot carry about the natural sounds, this little whistle could be a lifesaver.

And speaking of lifesavers, the knife also includes a small, folded set of survival instructions printed on waterproof paper. While many of these are second nature to the experienced hunter or outdoorsman, it could come in handy as a little reading material while awaiting rescue, a reminder of the old Boy Scout lessons, or a firestarter in its own right.

Overall, the Ultimate Knife proved me wrong. This Bear Grylls fellow must have some dirt under his fingernails after all. While it may not be the ‘ultimate’ as Gerber claims (if such a knife exists), it certainly deserves a second look from hunters and wilderness explorers who spend time in the backcountry.