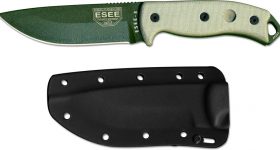 The ESEE 5P Fixed Blade Knife is one of those tools that can be used under most circumstances and even in the harshest situations you’ll encounter throughout your hunting adventures. It’s one of the favorite choices of professional hunters, but it has been deemed capable of withstanding the requirements of hardcore hikers and campers, and even hunters who are unexpectedly caught in a tricky situation and have to spend the night in the woods. Let’s see why the product stands out from the crowd and why it is a good option to consider these days.

First off, the blade that this knife comes outfitted with is made of high carbon 1095 steel, which automatically sets it aside from many of its competitors. In case you didn’t know, steel blades are okay and have a decent performance, but carbon steel ones retain their edge for a longer time and besides, they are much sharper. You do have to invest a little time in making sure that the blade is kept on par, but we believe that this is a reasonable trade-off. It is your duty, after all, to ensure that the blade is kept clean and lubricated so that it does not rust.

The blade can be sharpened conveniently and easily, and the best thing about it is that it keeps its keen for a long time, thereby making this hunting knife a friend in need. The blade measures 5.25 inches and the overall length of this knife is 11 inches. This is a medium to big-sized hunting knife that can be handled comfortably both by people who have small and large hands alike. Why is that?

Here’s where things start to become really interesting. Since the product comes with a micarta handle, you won’t have any issue holding it in your hand as you maneuver it. Whether you intend to chop wood, skin an animal, or perform any other type of cutting operation in the wilderness, this particular knife will be fully capable of meeting your expectations. The Micarta material is far better than rubber and other similar alternatives since it can allow you to benefit from superior grip, therefore giving you the reassurance that you will not accidentally cut yourself even if you use the knife in wet conditions, whether they involve rain or blood.

The sheath that accompanies the product is made out of Kydex, which automatically means that it is superior to those crafted from leather. The thing with leather sheaths is that they come with seams, so there will always be a possibility of you cutting through them if the knife is sharp and the orientation isn’t correct. However, with Kydex this situation is almost impossible since it is quite a rugged material.

In terms of design, this tool is a rather standard survival knife. We would like to note that the blade is black, and that might be an advantage for hunting applications since you don’t want to lose your stealth on account of your knife reflecting any light and attracting attention on yourself.

Whether you’re interested in this detail or not, we’ll note it anyway. This knife is manufactured in the United States of America, in Idaho, to be more precise. It is not some cheap cutting tool that will last you for a whole of two weeks before getting damaged. It’s rugged, versatile, and built to last, and some owners argue that they have the feeling that the knife will last them for several generations. Given that the product has received favorable ratings from individuals that have spent over ten years in the Army Infantry, it’s pretty clear that it does precisely what it has been designed to do.

As for complaints, we didn’t find any that were deal-breaking. However, we would like to add that the knife can be attached to the belt only vertically, which means that it might be uncomfortable for some hunters to use. You can’t change the orientation so that you keep the knife horizontally, and this is what a buyer has found after trying it. Another aspect that has to be considered is that this is not a small knife by any means. Some hunters consider it big while others describe it as medium – it all depends on your own physical attributes, after all, and the size of your hands.