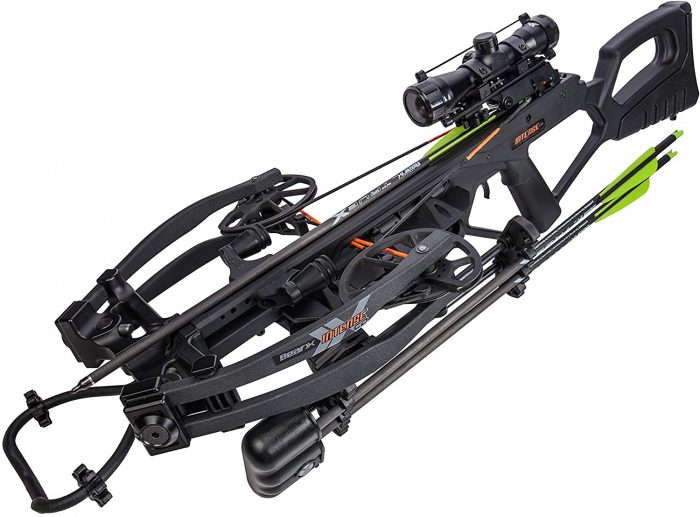 Bear Archery, one of the most appreciated crossbow manufacturers in the US, was founded in 1933 by Fred Bear, one of the pioneers of the bowhunting community. Up to the present day, Bear Archery has seen relentless growth due to its commitment to offer uncompromised quality. Here is more insight into this company’s heritage, its technology, and the features that helped it achieve and maintain success.

Here are the best Bear Crossbows for 2021

Who was Fred Bear?

Fred Bear was born in Pennsylvania. Contrarily to expectations, he only started hunting by the time he was nearly 30. After he took up the art of bowhunting, he still needed several years to gain skills and confidence.

However, his ambition and natural inclination for all things connected to nature helped him become a skilled bowhunter and also one of the first members of the bowhunting community.

Fred’s passion for hunting and bows was fueled by Art Young, another bowhunting pioneer whose name is honored by the Pope & Young Club, an organization dedicated to this hunting style. Fred met Art Young in the ‘20s and he often referred to him as ‘his hero’.

Fred was an avid traveler who managed to see much of the world during his 86 years of life. He was also a book writer, film producer, and television host. He is widely recognized nowadays as the father of modern archery.

Fred Bear was a self-made man. Born in a farmhouse in Franklin, he had two more siblings and a mixed heritage that included English, German, Swiss, and Dutch influences. In his youth, he used to work as a glue maker at Chrysler’s plant in Detroit.

When a fire destroyed the plant, Fred was left without a job, which urged him to open a bow business with one of his former work colleagues. This is how the Bear Archer Company was born, in a garage, and with an initial investment of only $1,200.

In the beginning, the company didn’t focus on bows, but it started doing this in 1938 when a bowyer was employed and the business started selling hand-made bows. In 1947, it started to concentrate on recurve bows and longbows while also shifting from hand-made products to mass production, deploying modern materials such as fiberglass.

The business was not striving in the first years and it took great sacrifices to maintain it and remain committed to it. Fred and his wife even gave up owning a house for a while in order to be able to make the business prosper. To do this, they decided to move to Grayling, Michigan for a while and live in a tent near a river.

It was only after 1961 that Fred saw the first signs of what was to become a great success. By that time, many states had changed their regulations and started to allow bowhunting. As this activity started to grow more popular, Fred’s business also prospered since there was a higher demand for hunting bows.

As the company started to strive, Fred gained more freedom that he dedicated to his passion for bowhunting and traveling. His journeys took him all over the world and he started to organize courses to teach other novices how to hunt using a bow.

His growing popularity prompted him to appear on television too. He was invited to different shows including The American Sportsman and The Tonight Show where he talked about his passion for bowhunting.

Moreover, he decided to produce different films to promote this sport and he was also an appreciated and prolific contributor for the niche magazines Outdoor Life and Archery Magazine. In 1950, Bear managed to obtain a patent for his Composite Archery Bow. Fred also became the president of Michigan’s oldest archery club, Detroit Archers.

In 1967, the Fred Bear Museum was founded as an attempt to further spread knowledge about the art of bowhunting. The museum was first located in Grayling, Michigan. It displayed archery artifacts, life-size animal mounts, trophies, historical bows, and memorabilia. Today, some of the exhibits are displayed at the Archery Hall of Fame and Museum in the Bass Pro Shops in Springfield.

By 1968, despite continuing to be the official chairman of the company, Bear decided to sell Bear Archery to Victor Comptometer. The next big step for the company was marked by the decision to relocate it to Gainesville, Florida, which happened in 1978. During that decade, the Whitetail Hunter was one of the bows that started to bring fame to the company.

Bear died in 1988 and after he was cremated, his ashes were spread near the Au Sable River in Michigan. He had an eventful life and he managed to dedicate most of it to his passion for bowhunting and producing top-quality bows.

For his continuous effort to deliver quality products under the brand Bear Archery and for his commitment to making bowhunting popular through his public and televised appearances, as well as his movies and books, Fred is generally recognized as the father of modern archery.

Nowadays, the Bear Archery is still located in Gainesville, Florida. The current owner of the company is Escalade Sports, a sporting goods manufacturer based in Evansville, Indiana. The company was acquired in 2003 but continues to carry out its activity under the emblematic name Bear Archery.

For more than 80 years, Bear Archery established itself as one of the leading bow manufacturers in the US. Due to the emblematic figure of its founder, this brand now enjoys a solid reputation. Not surprisingly, any online shop or store that sells hunting accessories has probably come across Bear Archery products.

This company has brought innovation to the industry and maintained a quality standard that helped it strive in this business for so long. One of the most reputable products it currently offers is the Intense crossbow, a compact and highly performant hunting bow that can shoot at a speed of up to 400 feet per second.

The Intense crossbow measures 10 inches in width when it is cocked and 14 inches uncocked. It has a compact design, which makes it easy to handle, store, and to carry and it weighs 8 lbs. One of the most notable features of this crossbow is its hard-hitting power and speed. It has a 12.7’’ power stroke.

Bear Archery offers a wide spectrum of different hunting devices that aim to meet the needs of any hunter regardless of their experience, age, or style.

The Bear X Intense crossbow is a perfect choice for experienced hunters who require speed and precision. The Saga 405 is another fast crossbow that’s easy to adjust and provides ambidextrous safety, which makes it suitable for any hunting style.

The self-cocking Bear X Desire XL is lightweight, compact, and easy to shoot. These features and its reduced speed make it ideal for beginners.

Moreover, the company’s Traditional series comprises some of the most elegant bows inspired by decades-old models that have been customized and refitted with modern and lightweight materials.

Bear Archery products are manufactured using the best materials. All bows and accessories are accurately produced and tested to meet the highest quality standards.