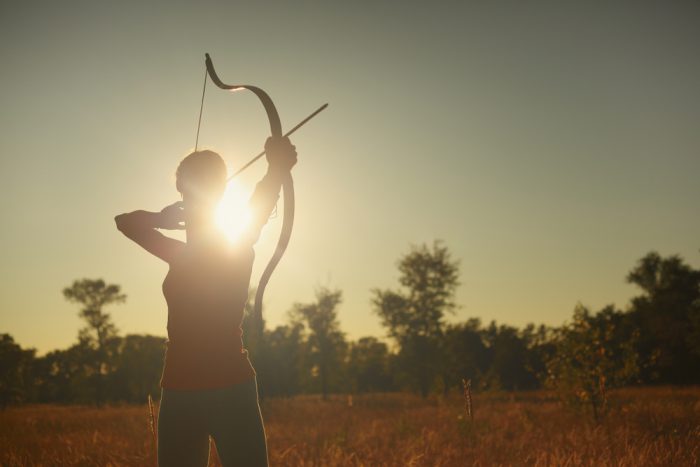 You may or may not have heard of the archer’s paradox. Either way, it’s a pretty complicated thing to explain, especially since it deals with elements from physics. You are bound to ask yourself, can this have any sort of effect on your bowhunting? Let’s take a look at what this whole thing is and how it applies to bowhunting.

As it is the case with most paradoxes, it’s not that easy to explain the archer paradox either, but we’ll do our best. Imagine a longbow. In theory, for you to be able to hit the center of the target, you’ll need to line the bowstring and the limbs in a straight line that is dead center with the target you are aiming for.

Yet, if you nock the arrow, things aren’t going to work that way, since the arrow shaft is going to be pointed to the side, which makes it be off-target. When you draw the bow back, the arrow’s end will align more with the riser and target downrange, but even then, you’ll notice this isn’t completely straight as you would want it.

The angle that forms between the arrow spine and the bow limb is where the magical archer paradox happens. This thing has bewildered people for hundreds of years. How can an arrow that’s not perfectly aligned fly straight to the eye of the target, without having to do any other changes to it?

As you can imagine, scientists have started to look into it decades ago, at least since 1859. This meant that everything was analyzed, including the bow weight, the draw length to the spine, the draw weight, or the mass of the arrow. Researchers have looked at everything that could play a role in this.

A lot of math would be necessary to properly analyze everything and explain it, but that somehow only makes things more complicated for the general public, as it’s rather a complex form of math, and not something very simple that everyone could understand with ease.

Fortunately, everything can be explained using words and very little to no math. Basically, the arrow can go straight to the target because after you’ve released it from the full draw, while in flight, the arrow will inevitably bend and flex several times. This is not something you can notice with the naked eye.

The bending builds and retains energy. When you’re doing the release, the arrow, which is flexible, after all, is going to snap around the limb of the bow; as a result, it will continue to follow the path of the bowstring. You can see how the arrow doesn’t fly in a completely straight line if you record it and play the video in slow motion.

If you work hard enough to become a specialist when dealing with longbows, you’ll learn how to anticipate the wobble that occurs during the flight and you’ll know how to compensate in your aim properly. It’s basically a combination of science and plenty of work for you to be able to land arrows in the same area again and again.

How does this affect bowhunting?

Of course, now that you know about it, you’ll wonder if this paradox is going to have any sort of effect on your bowhunting, how you can get to understand more about the wobble and many other questions that often deal with complicated math. Taking a different route to the answer, we’ll say that it all depends a lot on the type of gear that you use.

For example, the paradox is much more obvious when you are shooting an old-school longbow-style bow, compared to the modern versions. A very important aspect is testing the spine of the arrows for their level of flexibility. In order for you to get the same result, you need to have arrows that have the same level of flexibility.

In case you plan on hunting using a longbow, you will definitely learn, at some point, to do the same thing, as it is something of great importance in that activity. Since bowhunting is hard enough, you don’t want it to be more complicated by arrows that go all over the place because of how their spine is.

To make an analogy that is maybe simpler to understand, it’s like shooting different types of bullets from the same types of firearms. Yes, the bullets may have the same caliber, but because there is a difference in them, they will come out at different speeds from the barrel which you will notice in how they fly.

When we talk bowhunting, we are talking inches. Let’s picture that you want to hunt a deer using a longbow. Of course, there are many other factors that are relevant to this action, such as distance, how sharp the broadhead is, the tree limbs, etc, but if you have just an arrow that acts somewhat differently from the rest, you could miss the target.

Missing completely wouldn’t be so bad, but you could miss the heart and just puncture the shoulder blades. Now you have lost your shot, but you’ve also wounded an animal that got away, making it easy prey for others, but you don’t have the trophy. This is why it’s important to confirm that all of your arrows will quiver similarly.

You must also keep in mind the fact that an arrow that has too much flex is going to be less accurate and, on top of that, make your setup brasher. This would only scare the animal and you’ll have an even lower chance of ever hitting it. Not even a great broadhead could help you in such a situation.

Long story short, it’s important to learn things regarding this paradox, if you plan on hunting with a longbow, and figure out which stiffness of the arrow will work the best in the case of your bow. For you to be able to get better at this activity, you need to learn how to deal with the paradox and how to apply it in real life.

If you are using modern equipment-only, though, you will be surprised to find out that the archer’s paradox is greatly reduced or completely eliminated thanks to the design these products have. The modern recurve and compound bows have been a total game-changer in this activity.

The paradox is eliminated thanks to the fact that the riser is a bit offset from the bow limbs with a cutout. This cutout permits both the arrow and the bowstring to be ideally aligned with each other, resulting in the paradox being cut off. This means the arrow won’t go around the riser anymore, as it now has the chance of actually flying directly to the target.

Yes, the arrow is still going to wobble and flex a bit, even if you are using hi-tech and expensive compound bows. We can’t tell if we’ll ever be able to eliminate the wobble forever, someday, but since many people are now using modern devices with arrows that are much skinnier, the arched paradox seems to become a thing of the past.

5 accessories that no crossbow hunter can live without
Bow Hunting Gear - 8 Must Have Accessories for your next trip
Basic deer hunting techinques with a bow
Why You Should Avoid Long-Range Crossbow Shots
What are the advantages of saddle vs classic tree stand hunting?
Crossbow Hunting 101 - Essential Dos and Don'ts
Pick A Bow © 2015-2020 Pick A Bow (pickabow.com) is a participant in the Amazon Services LLC Associates Program, an affiliate advertising program designed to provide a means for sites to earn advertising fees by advertising and linking to amazon.com. As an Amazon Associate we earn from qualifying purchases.